With the advent of the rail transportation industry came the challenge of keeping accurate time between broad varieties of locations. Alternating current line-operated electric clocks would not be available until much later. Even then, the reliability of the distributed power system would be relatively unproven until well into the 1960’s and beyond. There was a need for a centrally synchronized clock system to support the growth of the railroad as the predominant emerging public transportation system, as well as the manufacturing sector during the Industrial Revolution.

The advent of broadly distributed synchronized timekeeping was marked in the 1890’s by the emergence of the self winding clock. The concept was simple. A multiplicity of “Slave” clocks at numerous locations were synchronized by a “Master” clock at a central location. Masters located at different sites were synchronized by the Naval Observatory in Washington, DC. The synchronization signals (one per day for the masters in each time zone) were transmitted over Western Union’s telegraph lines to the clocks. The Self Winding Clock Company owned and leased the clocks. They would provide a service through Western Union to customers in need of accurate or synchronized timekeeping and charged appropriate fees for this service. Western Union would take care of maintenance (e.g., changing batteries etc).

In the most popular arrangement, two early 1 ½ volt carbon-zinc dry cells (measuring 2.5 inches round by 6.5 inches long) were hooked in series to produce 3 volts which powered an automatic winding mechanism or motor. Earlier units used Leclanche wet cells but these were later displaced by the dry cell. This kept the mainspring at constant torque, producing a very accurate clock. The winding mechanism would trigger generally once per hour, but other intervals were also used. On the average batteries would need to be changed about once per year or so.

Today, these self winding clocks are becoming collector’s items. The going prices at marts have exceeded $500 for many models—even more for regulators with precision mercury-filled pendulums and beautiful wood cases. Some long case styles are selling for over $2500.

What Voltage does my self winding clock need?

This is probably the most frequently asked question, and it is sometimes difficult to answer. The most commonly encountered model produced by the Self Winding Clock Co. of New York is the 3 volt vibrating motor Style F movement. Most American Clock Co. impulse models likewise required 3 volts to wind. This applies to the vast majority, but not all. When in doubt, it is a good guess or starting point. If you are in doubt, we are happy to help walk you through it. Sometimes pictures of the movement are helpful in determining the requirements. Most confusing are several of the minute-wind models originally manufactured by Stromberg or Standard Electric Time Company, or the vibrating-wind Stromberg models. These were manufactured in a variety of voltages from 3 volts all the way up to 110 volts. We have solutions for all of them. We are always interested in your feedback if you have examples of clocks with different requirements.

Chinese No. 6 Batteries.  There are numerous Chinese No. 6 knock-offs out there (Exell, Cattle Head, and others), but they are largely the ancient carbon-zinc chemistry, which are much shorter life than alkaline technology.  They also pose a chemical corrosion and disposal problem, much like the original No. 6 battery.  We don’t want our steel clocks corroded by a battery leak–and this is more likely with the Chinese knock-offs than with any other alternative. Further, with shipping you’re going to spend $66 or more every 1-2 years to replace a pair these, because they are not renewable.  We have been approached by manufacturers to resell these units, but refuse because we don’t want to promote dumping chemicals into our landfills, nor are we fond of exposing our customer’s clocks to possible corrosive leaks.

Our Renewable No. 6 Batteries.  To provide the 3 volts for the majority of vibrating motor Style F self winding clocks, our Model 1900L, which internally connects two alkaline D cells in parallel, offers long life, on the order of 3-4 years run time (sometimes more, on well maintained clocks). It is our most popular No. 6 unit and we strongly encourage you to consider it.  The Model 1900L is warranted for 5 years, and is fully renewable–the internal alkaline D cells can be easily replaced.  Because it’s renewable, you’ll probably save nearly $200 every 5 years (our warranty period) with our product, not to mention the environmental benefits.

These products provide a very reliable connection method to the clock’s wires and terminals. This is important! One of the most common problems we run into is poor connections. Loose battery holders with flying wires twisted around the clock’s terminals or wires is a recipe for trouble! Tape does not help either and leaves a non-conductive “goo” all over the original connections, which further aggravates the problem. Alligator clips are a no-no with self winding clocks, since the contact resistance aggravates reliability issues.  We never use them in clocks, and you shouldn’t either.  Our battery units solve these problems with absolute certainty. 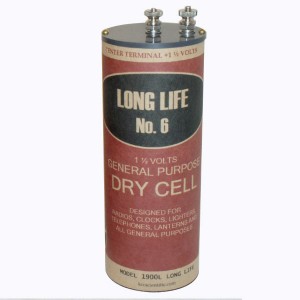 Rechargeable Alternatives and the Model 1900R3

An extensive study of rechargeable batteries as alternatives to running self winding clocks has been conducted by us. We’ve used Enersys spiral wound lead-acid rechargeable cells in our Model 1900R and Model 1900R2 for years, but have moved away from them.  They are great but need to be charged very frequently–even though they are capable of powering a self winding clock for well over the time you need between charges to keep the batteries healthy. Therefore they tend to be degraded by simply using them. We no longer recommend them, except for customers that want to float charge their batteries.  If you float charge them, they will last 10 years and are a great way to power the clock from an AC outlet while maintaining battery backup.  Contact us if interested in this approach; the Model 1900R2 can be made available as a special build.

Our latest (and standard) rechargeable, the Model  1900R3, uses a LiFePO4 battery internally.  This is the safest of all lithium chemistries, but that doesn’t mean you should abuse them.  We don’t recommend float charging them, because there is very little data on whether this is good or bad.  We have been using them in our clocks for over 5 years now, and they show none of the cycle degradation that the earlier lead-acid based 1900R and 1900R2 showed even after a few years.  Customers have given us similar feedback on the Model 1900R3.

We also offer a 24-volt Model 1900R3 for Telcos.  It’s the pinnacle of convenience for powering Telcos.

Additional Voltages. Additional products are available from Ken’s Clock Clinic for clocks that require voltages other than 3 volts.  For example, The 1900-24V Kit is equipped with Alkaline D cells and an innovative, high-efficiency electronic voltage converter. The kit outputs the voltage necessary to power 24 volt self winding clocks very reliably, and without the use of an unsightly power cord—or worse yet—unsafe and outdated rectifiers and transformers dangerously wired inside the clock. With all of this, the kit still looks like an ordinary pair of No. 6 cells!

History of Powering 24 volt Clocks. Some self winding clocks used as masters and Bell System long distance call timers (called “Telcos”) were originally powered from large battery arrangements available at the site. In these cases, the batteries were not installed in the clock, but were remotely located in closets and basements where they remained cool and out of the way, and where there was sufficient room for the 8 or 16 (or more) cell banks. Wires were run within the structure between the battery banks and the clocks. With the advent of the 1900-24V Kit and 1900R-24V, it is possible to power these clocks from an attractive battery unit and eliminate power cords and unsightly transformers that take away from the vintage look of the clock. It’s also infinitely safer than some of the unfortunate arrangements we’ve seen rigged to power these clocks.

The collector will run across 24 volt “Telco” Self Winding Clock Co. units periodically. They are great clocks, if you can get one. Many of them were used to provide the Bell System with a long distance billing system that charged in 6 second increments. They are often equipped with switches and synchronizers which were used in conjunction with other clocks to provide state of the art (at the time!) long distance call timing.  We can help you with both power and synchronization with these clocks.  Just ask. 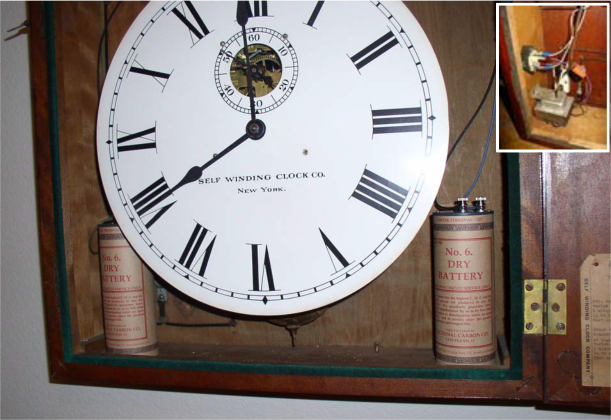 At the end of this article is a .pdf file that shows how to connect battery solutions to a typical 24 Volt telco.

Lantern Batteries. There are those individuals that prefer to run their self winding clock from a 6 volt Alkaline lantern battery. This approach is not good for the clock and is highly discouraged.  We’ve seen the damage from this practice; it is both time-consuming and expensive to repair. The most compelling analysis is based on the square-law relationship between energy dissipated in the motor (contacts, mechanical) and voltage applied. So, for a clock designed to run on 3 volts, applying 6 volts quadruples the energy that the motor must absorb during winding. This additional energy will accelerate failure. We’ve witnessed it time and time again with clocks we have seen coming in for restoration. What we see is a clock with contacts worn or burned substantially. Without looking at contacts under a microscope, the owner cannot “see” the damage that is occurring with the wrong voltage until it is too late. We also see accelerated mechanical damage to all of the winding components. Mathematics will predict that clocks run on the correct voltage will be preserved much longer.

Primary Lithium D Cells.  Lithium Thionyl Chloride D cells are not designed for loads over 100mA.  In a word, don’t use them.

Wall Voltage adapters (sometimes called wall warts). Wall adapters are available for 120 volt operation, but these tie the clock near an outlet and detract from the nostalgia. Powering 24 volt and other voltage clocks is yet another matter. If you choose this approach, great care must be taken when purchasing wall voltage converters. Many collectors make the mistake of purchasing an unregulated wall adapter. An unregulated wall adapter will NOT output the proper voltage except under full load. For example, we ran into a customer recently that was powering a clock from a wall adapter rated for 3 volts at 1 amp. He wondered why his platinum contacts were burning out.

We measured the open circuit, unloaded output of the adapter. It read 7.8 volts! Sure, under 1 amp load it measured 3 volts. But self winding clocks draw in the neighborhood of 0.2 amps. At this load, the wall adapter would output 6 volts—much too high for our self winding clocks. The trick to success with wall adapters is to buy a regulated unit rated for 3 volts at 1 amp or so. It is highly preferable today to buy Energy Star rated devices so that you’re not adding to the billions of dollars spent annually to generate electricity that is carelessly wasted as heat running unused, inefficient adapters. Contact us if you would like to use this approach; we can supply you with an Energy Star rated converter exactly matched for your clock for a very affordable price.

Users of alkaline and lithium cells should dispose of spent batteries responsibly!

NOTE: We will also consider custom voltages and configurations to fit your exact needs. Simply contact us; let’s discuss your needs.