Are you the owner of a National Self-Winding Clock, but struggle with it because of intermittent contact problems?  Your solution to the problem has arrived!

The Model 1900WG-4.5V is specifically designed to drive the collectible and very unique National Self-Winding Clock Company (of Champaign, Illinois) movements.  Most NSWCC movements have intermittent problems with contacts by design.  The Model 1900WG-4.5V overcomes this issue with its built-in timing pulse which activates the coils every 6 minutes.  This assures full run between winds and absolutely certain winding every time–without deteriorating the contacts.  No modifications to the clock movement are needed; simply connect the Model 1900WG-4.5V to the clock’s coils with the included vintage cloth-covered wires.

The Model 1900WG-4.5V can also be connected as a super battery (4.5V). If you prefer the “conventional” approach of utilizing the NSWCC movement’s internal contacts, simply connect the device as instructed, and it acts as a conventional “super battery” with increased current output and very long life capability.

NSWCC movements are impulse-winding and some require 3-5x more current to activate the coils than any other self winding clock.  Many were originally equipped with (3) No. 6 batteries to achieve acceptable drive and battery life. Some clocks were originally fitted with a mercury tilt switch, others a contact attached to the winding arm which activated against a winding arm wheel. A contact failure would result in a dead set of batteries, and a stopped clock.  Some clocks are found with no contacts remaining. The Model 1900WG-4.5V takes care of all of these issues.

Charles Crook and Percy Clark were credited with the fundamental patents and the founding of National Self-Winding Clock Co. in Chicago, Illinois circa 1895.  The company produced clocks in Elgin, then Champaign, Illinois, and eventually in Bristol, CT.  It lasted roughly 12 years before closing its doors although clock inventory continued to be sold by Shelby Besore (Urbana, Illinois) for a few years thereafter.  Not many National Self-Winding Clocks remain. The mantel clocks suffered from technical problems resulting in their early demise, but there were other issues related to the short life of the company.  Any surviving clocks are considered unusual and collectible.

The National Self-Winding Clock Co. manufactured wall clocks in various sizes, as well as mantle clocks–both time only and striking.   They are generally identifiable by the unusually large coils flanking the lower left side of the movement.  Some were equipped with synchronization systems, located on the upper right side of the movement.  See the illustrations below (click on picture for larger view).  They’re great clocks, unique and very historic.  Time to get them going again with this great new product!

A special thanks to Ray Brown for his help in evaluating prototypes, determining the proper parameters needed to drive the NSWCC movements, the history above, and for many of the great pictures included here. 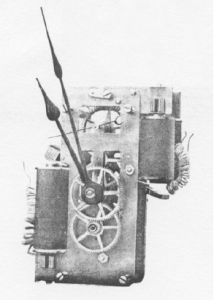 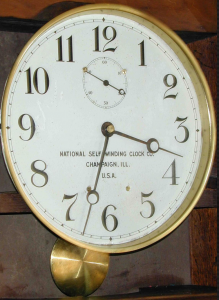 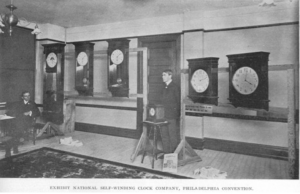 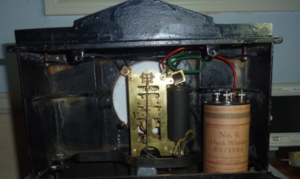